We will present this letter under the category Music Notation on the website of http://www.dozenalsociety.org.uk/ and on the forum of http://www.musicnotation.org with the request to the governing body of that organisation to move this new type of dozenal notation see Annex-1

from the wiki section to the 7-5 Pitch pattern section. There are more then 100 other graphic solutions possible for this type of notation than the one proposed by me.

Several members of the community know that I am advocating for some years now as well as others that Western music can be best represented by the duodecimal number system and a proposal was made to change the nomenclature in such a way that twelve single digits are used for each semitone eg as I have done it in Hamburg Music Notation. Together with Arpegemusic we developed the software Pizzicato Alternative Notation that corresponds to the pictorial representation of Numbered Notation (Jianpu) , which is commonly used in Asia where almost all beginners learn this method.

I myself even could read this notation only at limited speed despite intensive efforts.

It is easy to learn, write and read, preserves the conventional diatonic structure and enriches it by opening it to dozenal mathematics. I try to get people interested from the educational and scientific field and try to raise funds to have my hypothesis tested.

It will be presented in detail on my website www.hamburgmusicnotation.com with examples. It uses five lines as in conventional music notation but places the noteheads in a way that eliminates the need for additional clef. The method requires three ledger lines between 5-line systems and enables easy depiction of all audible sounds as continuous system.

The use of two different forms of note heads within an octave allows like the piano, the realization of all scales. The use of accidentals is unnecessary.

The proposed notation can be represented with almost any currently in-use music software. Unfortunately, however, not the correct MIDI is played. A few other changes are necessary in order to achieve a correct image of music. The input of musicnotation of this type into existing software is currently very cumbersome.

Therefore Harry Schreiber and myself created a specification open to all programmers, who want to implement it, to facilitate this task.

We place it under the

That is free for any noncommercial use.

Commercial use has to obey copyright laws and requires our express permission. 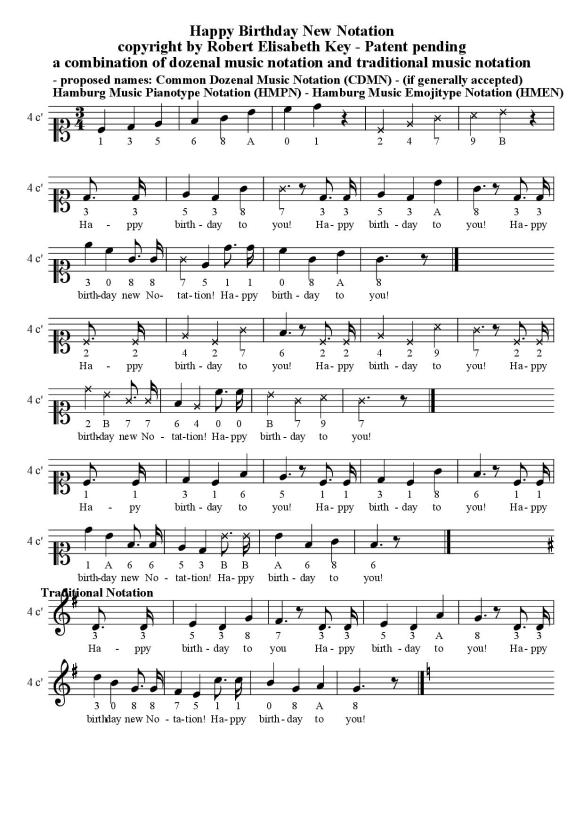 We have developed a new graphic method to represent Western music with the help of the duodecimal system and the conventional piano keyboard.

The WordPress.com stats helper monkeys prepared a 2014 annual report for this blog.

A San Francisco cable car holds 60 people. This blog was viewed about 3,500 times in 2014. If it were a cable car, it would take about 58 trips to carry that many people.

The Solfège system is without doubt an excellent way to promote vocal training. You can learn to hit tones and intervals better and move in the key and on the pitch of each piece of music without problems, if the root tone is specified. If we use movable do we transpose all scales to C major.

This, however is something that we really want to abolish with any alternative notation. Irving Berlin avoided transposition by using a special piano. Transposition can be avoided if one uses dozenal numbers such as in Hamburg music notation or other cipher notations. To sing numbers works well in some languages with one syllable words for the digits up to a dozen. However this does not sound very good.

Then I learned the proposal by Joe and others to expand the solfège system and name the black keys. A friend suggested to use syllables that sound more “italian” since solfege is of italian origin.

I propose to use solfège with slightly different syllables as proposed by Ann Glover (do, re, mi, fa, so, la, ti, do) that are frequently used in relative solomisation for major scales.

See wikipedia for Ann glover and relative solomisation. Once you are familiar with the dozenal nature of music you can use any twelve names to characterize the twelve digits. See the extensive literature on that subject in the publications of the dozenal societies of America and Great Britain.

If five syllables are added for the black keys this clarifies the position of each note and if you combine this with the corresponding number for each position you can move easily within that system.

Then there is no need for complicated fixed-do naming systems as suggested in wikipedia 2015 section solfège.

I quote part of the discussion there in favour of a fixed-do system: “The question of which system to use is a controversial subject among music educators in schools in the United States. While movable do is easier to teach and learn, some feel that fixed do leads to stronger sight-reading and better ear training because students learn the relationships between specific pitches as defined independently, rather than only the function of intervals within melodic lines, chords, and chord progressions. Of course, this argument is only valid if the fixed do is used with chromatic solfège syllables.” See wikipedia eng. 2015 “fixed do solfège and table: Chromatic variants of fixed do”

My Proposal is to use the five syllables ba-za-ge-ne-pa as names for the black keys.

Advantages are: the syllables sound “Italian” if za is pronounced like in zappa = hoe and if ge is spoken like in angelo = angel.

Each number ( syllable) begins with a different consonant DbRzMF nSgLpT. So that each syllable can be recognized by its first letter, and numbers can be replaced in our software by the by the correct consonant. Black keys start with small letters.

Vowels in the sequence DobaRezaMiFa naSogeLapaTi are found the same in number but in different order in the groups123456 = DobaRezaMiFa and 789AB0*=naSogeLapaTi. This is probably the reason why the syllables sound pleasant to us. The sound of solfège remains the same.

Thats why I call it dozenal solfège. To demonstrate how that sounds and looks I refer to my film included here or on youtube

produced with our software Alternative notation by

Everybody is invited to discuss the examples on youtube demonstrating that these syllables are easy to sing and sound good. It helps to hit the correct pitch and might even be of help to recognize dozenal numbers and become familiar with the dozenal system. In addition this system can be used without changes in conventional notation.

Have a Look and listen

free for 90 days only for kindle prime customers

# 2 Sing any song any interval any scale by numbers

#1 sing any song any interval any scale by numbers

Learn the mathematics of welltempered music.
Sing any song, any interval and any scale by the use of one syllable, single, dozenal digits as text.
Compare Standard Music Notation and http://www.HamburgMusicNotation.com
and the software Alternative Notation by http://www.arpegemusic.com